Sneak Peek: Mistress of Death by Kathryn Trattner with Giveaway! 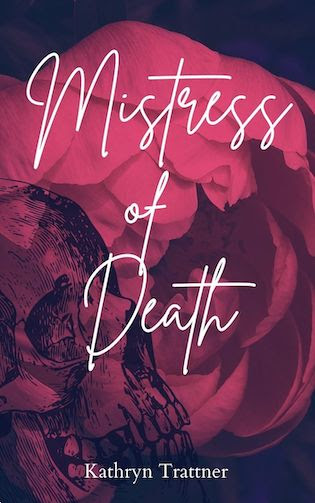 In the city of Telum, at the edge of a dying empire and divided by superstition, anything can be had for the right price.

Gabriel Mercer, raised in the shadow of the most famous assassin the city has ever known, wants nothing more than to make a name for herself. Taking a solo contract from an up and coming politician seems like the best way to make it happen.

The night Matthew, a police officer with a spotless record, discovers Gabriel unconscious his world changes. On opposite sides of the law the pair strike up a bargain that becomes harder and harder to keep as their attraction grows.

When the city starts to burn Gabriel will put everything she’s gained at risk for a chance at revenge. Even if it means her future going up in smoke.

Are you a book reviewer?
You can request an ARC here!

The curtain dropped, intermission bell ringing. A storm of rustling fabric filled the cavernous room. Men and women stood, talking and laughing, in imitation of the performance.

A waiter knocked and entered the box. “Would you like champagne?”

“Of course, sir. I also have a message for the young lady.” The man paused, waiting for Mercer’s approval. A nod and then a cream envelope was produced, pulled from a pocket with a twist of the wrist. The server held it in Gabriel’s direction.

“Thank you.” Gabriel took it, running a gloved hand over the surface; warm, soft the way only expensive paper could be.

Gabriel waited until the door shut before looking at Mercer. He smiled.

“He wasn’t when the curtain went up.”

“No,” Mercer sighed, crossing his legs as he turned to face her. “Open it, see what the man of the moment has to say to the woman of tomorrow.”

She smiled, meeting his gaze, but it faded when she saw his expression. “What is it?”

He shook his head. “Open it before he returns to his box. It’s better not to have him see your reaction.”

Gabriel shot a look across the room. Royce’s box stood empty, the little golden door open. Hesitating over the envelope, she felt the weight of it in her heart. It was a line, and once crossed she would not be able to return.

“I know you don’t like him,” Gabriel began, turning the paper over in her hands, “but he’s very powerful. If you want me to be someone of consequence, I could make a worse choice.”

“This said by the woman he drugged and tried to keep against her will.” Mercer snorted, leaning back in his chair.

“I could have handled—”

“You would have become a pawn overnight, a puppet on silk strings. He is flame, you are moth. This cannot end well for you.”

The constant argument between them warmed, heating to spill over into the box. Since that night, one of failure in his eyes, all roads led here. Nothing had been settled and both tried to pretend their world remained unchanged; their relationship, not quite father and daughter, not Master and apprentice, teetered, ready to fall into some unplumbed depth.

The champagne came, nestled in a bucket of ice with glasses so thin they could cut air. The waiter uncorked the bottle, all quiet professionalism, and poured before leaving. The theater around them buzzed as people came back from the reception area and the bar. The boxes on either side remained empty; the most important one, across the room, waited for its occupant.

Sipping champagne, rolling it around in her mouth, Gabriel bit words back. There was anger, resentment. After all this time, all the training, she expected his trust. He should trust her to do the right thing. But every move she made he questioned, each thought and action policed.

She watched him pull his cigar case out, a gift from her several years before. No engraving, no words of love, just the solid gold, heavy in his hand, and kept close to his heart. He pulled a lighter from his pocket, putting flame to the slim cigar.

“May I?” Gabriel extended a hand. He raised an eyebrow but passed it without a word.

Minutes passed, the room filling, and Gabriel drank one, then two glasses of champagne, the conversation between herself and Arno Mercer over. The letter lay in her lap, the lighter balled in a fist against her thigh. She tapped a foot, waiting.

Royce returned to his box; she saw movement out of the corner of her eye. The final bell for the attendees to take their seats echoed, voices hushing.

Gabriel set the glass down, eyes on her hands, refusing to look across the room. Flicking the lighter open, watching the flame jump to life, she lit the edge of the cream envelope. The fire caught, eating heavy paper. A burst of warmth against her skin, the feeling of power as the little blaze grew. She felt watched, the hair on the back of her neck standing on end.

“You’ve caught his attention,” Mercer said, pouring himself another glass. “What do you plan to do with it? Let it burn your fingers?”

Watching the paper turn to black ash, Gabriel dropped the remnant in the ice bucket. She focused on the curtain; the orchestra tuned, the first strings of music coming from the pit. The lights dimming, she could feel Royce like a hole in her cheek. “But in a year, I want the Left Bank to recognize me as the Mistress of Death. If you don’t want me to go to him, you must help me. Or why else have you spent your life training me?”

Mercer nodded, reaching out to grasp Gabriel’s hand. He’d never touched her growing up, never hugged or kissed her cheek. He had not even held her hand until last week, when he’d pulled her from Royce’s house.

“Gabriel, Mistress of Death. In a year, the entire city will know you.” Kathryn Trattner has loved fairy tales, folk stories, and mythology all of her life. Her hands down favorites have always been East of the Sun, West of the Moon and the story of Persephone and Hades. When not writing or reading she's traveling as much as possible and taking thousands of photos that probably won't get edited later. She lives in Oklahoma with her wonderful partner, two very busy children, one of the friendliest dogs ever, and an extremely grumpy cat who doesn't like anyone at all.

Want to hear about the latest release? Sign up for my newsletter Magical Mundane Madness at kathryn.substack.com