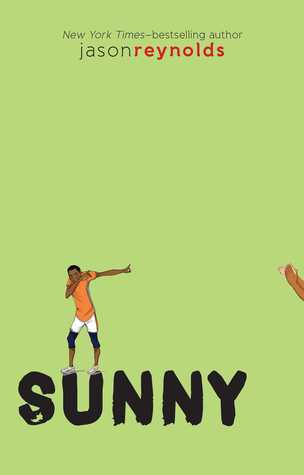 
Sunny Lancaster is a winner. Wih-winner. When it comes to the 1600 meter, Sunny can beat anyone by, well, a mile. But for Sunny, winning is boring. Buh-boring. Truth is, Sunny doesn't like running. Never has. What Sunny really loves... is dancing.
The boom-bap bap of his teacher. Aurela's dance routines beats the chick chick chick of his track meets any day. Sunny loves his team, though, so he can't quit, but he also can't be on a track team not run. And he definitely can't be on a track team and dance. But it turns out track isn't just chick chick chick. It's also whoosh whoosh ahh.
If Sunny lets loose everything he's been holding inside, will it be his best move ever, or will it be his biggest mistake?

This is the third book in the Track series, but I did not read the other two before diving into this one. Although reading the other two books would have given me more insight into some of the characters and circumstances, I had no trouble connecting with Sunny and his story. In other words, this can be read as a stand alone.

Sunny runs track. He runs track and wins. Always. He loves his team, although he isn't really a fan of running and would rather do something different. Sammy lives with his father, who he doesn't get along with necessarily, and he's homeschooled, which doesn't leave him with a ton of social interaction outside of the team. This tale is a personal venture into Sammy's struggles to balance relationships with sports, while still exploring his own dreams which might not meet others' expectations.

Written in diary form, this took a few entries before the writing style and Sunny sunk in. Sunny is packed full of energy, and his mind bounces around as vividly as he does. Sunny's diary isn't boring. He's humorous and has tons of antics in his thoughts, which guarantee tons of smiles. Yet, there's a very serious side to Sunny too. The story is, at times, bittersweet. This, combined with Sunny's addicting personality, creates a read which grabs and hits the emotional heart strings.

The author has a wonderful ability to set himself into a middle grader's skin and slide into that world. The concerns, reactions, thoughts and emotions come across naturally, making Sunny into a kid living next door. He's easy to empathize with, and the topics he hits never venture far from those faced by many kids that age. It's a book to laugh, roll the eyes with, cheer along with and feel for when unpleasant or sad moments hit.

The sport aspects flow in with the rest of the tale and will come across as very familiar to track (and other sports) fans. Plus, it's a real treat to see track as the main setting in a middle grade series. . .and well done, at that. It's a book for boys as well as girls and is interesting enough to connect with even slightly more reluctant readers.

In other words, this one gets full thumbs up from me.

Jason Reynolds is a New York Times bestselling author, a Newbery Award Honoree, A Printz Award Honoree, a National Book Award Honoree, a Kirkus Award winner, a tow time Walter Dean Myers Award winner, an NAACP Image Award Winner, and the recipient of multiple Coretta Scott King honors. Reynolds was the American Booksellers Association's 2017 spokesperson for Indies First, and was the national spokesperson for the 2018 celebration of School Library Month in April 2018 sponsored by the American Association of school Librarians (AASL). Jason's many works of fiction include When I Was the Greatest, Boy in the Black Suit, All American Boys (cowritten with Brendan Kiely), As Brave As You, For Every One, the Track (Ghost, Patina, sunny, and Lu), and Long Way Down, which received both a Newbery Honor and a Printz Honor. He lives in Washington, DC. You can find his ramblings at JasonWritesBooks.com.