Happy Book Bday, About Last Summer by Patricia B. Tighe with Giveaway! 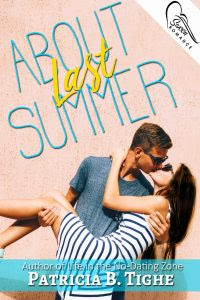 
by Patricia B. Tighe
Swoon Romance
YA Romance
342 pages

Pretend to be from Spain? Act like she can barely speak English? Sure, why not? It wouldn’t be the first time Gabby Vega had agreed to a challenge from her best friend, Kenzie. Besides, it’s only for a week of vacation with Kenzie’s cousins. Gabby will prove to Kenzie she can keep up the fake identity for the whole trip—that she’s not a quitter.
There’s just one major surprise. Noah Jernigan is also staying with Kenzie’s cousins. Noah, the boy she fell in love with at drama camp last summer and the boy she had to dump when it was over. The boy who knows who she really is.
Noah can’t believe it when Gabby appears at the Bryson’s vacation home in the New Mexico mountains. He hasn’t seen her in a year. It practically took that long just to get over her. And now she’s Gabriela from Spain? All he wants is to get as far away as he can. Or maybe the exact opposite. Stick as close to her as possible and find out what the heck happened last summer. And definitely get some payback.
Now Gabby has to keep Noah at arm’s length as she pretends to be Gabriela. She doesn’t want to answer his questions or rehash last summer. Because one thing is clear—the more time she spends with Noah, the more she’s in danger of falling for him all over again.

Buy on Amazon/Add on Goodreads

The mother of two grown sons, Patricia B. Tighe lives in West Texas with her husband and dog. She eats way too much pizza, drinks way too much coffee, and watches way too much NFL football. On the bright side, she also reads and writes teen fiction. She promises to include as much romance, angst, and adventure as possible in her books.

Win an eBook copy of ABOUT LAST SUMMER a Rafflecopter giveaway
Posted by T Drecker at 4:00 AM

Email ThisBlogThis!Share to TwitterShare to FacebookShare to Pinterest
Labels: About Last Summer, Giveaway, YA Romance