Excerpt: Legacy by Ellery A. Kane with Giveaway 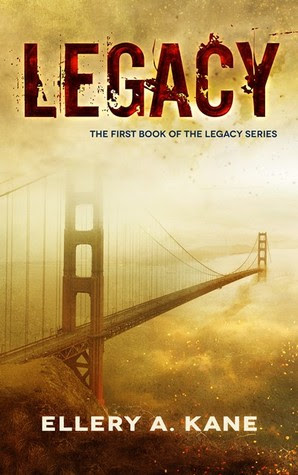 
How do you want to feel today?
In 2041, the choice is yours.
San Francisco is deserted, the Bay Bridge bombed, and the BART subway trains grounded. The Guardians, members of an elite and mysterious government-appointed military police force, are maintaining order at all costs—thanks to emotion-altering drugs like Emovere that suppress fear and anxiety. Lex Knightley, daughter of a prominent forensic psychiatrist, risks entering the devastated city to partner with the Resistance, a group of rebels intent upon exposing the dangers of Emovere. Lex discovers an ally in Quin McAllister, a magnetic Guardian Force recruit with a haunting past that binds them together. As she uncovers the secrets of the Guardian Force and confronts the truth about her family, Lex begins to realize that even those closest to her are not quite who they seem.
Legacy is the first book in the Legacy trilogy but can also be enjoyed as a standalone.

Quin shined his flashlight upward, spotlighting Coit Tower, which shot up into the evening sky like the tail of a comet. Not even this once-majestic landmark had escaped destruction. At the base of the tower, I could see graffiti and crumbling rock. Quin pushed his shoulder into the tower’s door several times before it opened with a thud. Inside, the air was stale and bitterly cold.
“This way.” Quin pointed up a spiraling staircase. When we reached the observation deck, Quin extinguished his flashlight. The soft glow from the setting sun barely illuminated the city. From up here, I could almost forget the desolation below. But as I looked toward the Bay Bridge, I gasped. The reports that my mother and I had heard were correct. The highway was split into two distinct pieces with only sky in between them. A portion of the bridge had fallen away and was frozen in a sharp descent toward the water.
I looked over my shoulder expecting to see Quin, eager to ask him about the bridge. But he was kneeling on the opposite end of the deck in a spot where the concrete was broken away.
“What are you doing?” I asked.
Quin didn’t answer, but began moving aside some of the broken pieces of stone. The sky was almost dark now, concealing him in shadow. I saw him slip something into his jacket, then pick up another smaller object before standing to face me.
“You said that you couldn’t figure me out. That’s because you don’t know anything about me.” Quin took a step toward me, his hand extended. “This is something about me.” He handed me a book of poetry. It was so well-worn that its cover was soft.
“It was my mother’s,” he said. “Just like your book. This is the only part of her I have left. Before I joined the Guardians, I used to come up here a lot to escape from the world. Right after I went AWOL, I hid the book here. I figured it would be safer.”
I knew Quin had hidden something else here—something he had concealed in his jacket. But I bit my tongue, holding my question until the time felt right.
Just like my book, Quin’s book had a dog-eared page. I flipped to it: Robert Frost’s “The Road Not Taken.”
“Was this her favorite?” I asked.
Quin smiled. “No, it’s mine.”
“I never figured you for a poet,” I joked.
Quin laughed, but only for a moment. Then his face became serious. “There’s a lot you don’t know about me, Lex. I’m sorry that I haven’t . . . that I couldn’t  . . . that I can’t . . . be more . . . open with you.” His face looked defeated as he stumbled over his words.
I shrugged, giving him a sympathetic smile. “You’re trying, Quin. That counts for something.”
He gave a half-hearted nod. I handed back his mother’s book, and he pocketed it inside his jacket.
“Have you ever taken Emovere?” he asked.
“Never,” I answered. I was surprised by the directness of his question. “What’s it like?”
He sighed. “At first, it’s exhilarating, freeing. You feel like nothing can stop you, like something heavy was lifted from your shoulders, and you can stand up tall again.”
Quin paused, choosing his words carefully, “With everything that had happened to me, it was a welcome relief. But after a while, you just feel numb, even after you stop taking it. The worst part is that it starts to feel good to be numb.” 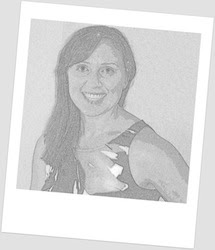 Forensic psychologist by day, young-adult novelist by night, Ellery Kane has been writing—professionally and creatively—for as long as she can remember. Just like her main character, Lex, Ellery loves to ask why, which is the reason she became a psychologist in the first place. Real life really is stranger than fiction, and Ellery’s writing is often inspired by her day job. Evaluating violent criminals and treating trauma victims, she has gained a unique perspective on the past and its indelible influence on the individual. An avid short story writer as a teenager, Ellery recently began writing for enjoyment again, and the Legacy series was born.
Ellery’s debut novel, Legacy, has received several awards, including winning the Gold Medal in the Independent Publisher Book Awards, young adult, e-book category. Ellery was recently selected as one of ten semifinalists in the MasterClass James Patterson Co-Author Competition.

Email ThisBlogThis!Share to TwitterShare to FacebookShare to Pinterest
Labels: Ellery A. Kane, Giveaway, Legacy, YA Dystopian